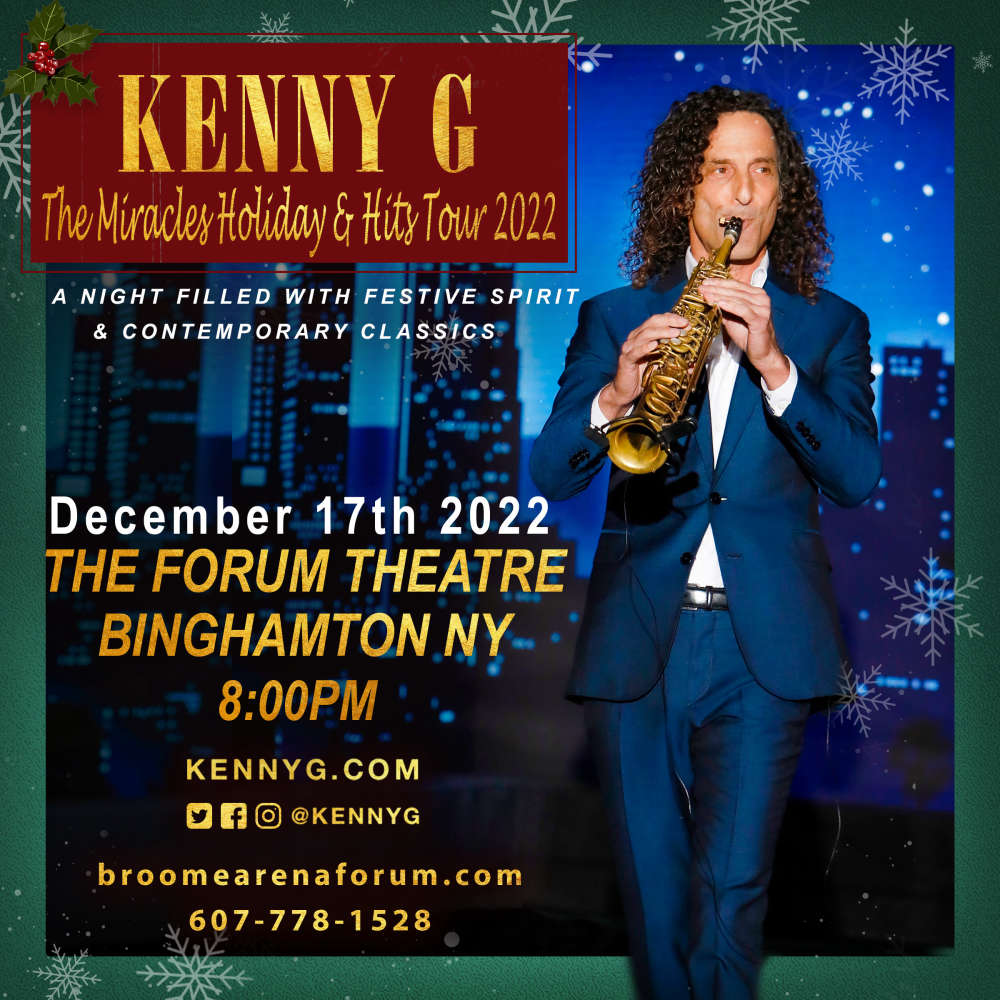 Kenny G live in concert playing the hits and all of your holiday favorites!

More Information (1071 The Bear is not responsible for external websites)

The sound of Kenny G’s saxophone is as iconic as his curly coif; indeed, both are instantly recognizable. His latest release, New Standards, the title of his 19th studio album, fifth for Concord Records and first since 2015’s Brazilian Nights, could well be used to describe his four-decade body of work, a vision of jazz that helped launch both a musical genre and radio format.  After director Penny Lane’s critically acclaimed HBO documentary, Listening to Kenny G – which humorously reconsiders the purist critical backlash to his music – and a demand performance on Kanye West’s Grammy-winning Jesus Is King album, it’s now cool to not only be Kenny G, but admit you’re a fan of his as well.

“I didn’t realize how strong the message was until I saw the finished film,” says Kenny, who has both the best-selling instrumental album of all time in the Diamond-selling, 12-times-platinum 1992 Breathless, earning him his only Grammy Award among 15 nominations, and the Guinness Book of World Records mark for longest sustained note ever recorded on the saxophone. The feature probes some of the many Kenny G accomplishments, from his song “Going Home” being used as the official end-of-work-day anthem in China to his skills as a golfer and airline pilot. He was also one of the original 10 investors in his Seattle hometown Starbucks Coffee.

Recalling his music spawning the “smooth jazz” phenomenon, Kenny explains, “I’m proud of the fact it was a new style of music that no one was either playing or writing at the time. And it touched a great many people who weren’t into traditional jazz, pop or R&B.  Somewhere in the middle, they found something they were looking for and liked.”

New Standards continues the musical path that has seen Kenny G sell 75 million albums around the world, looking back to the classic ‘50s and ‘60s jazz ballads for inspiration, updating them with new studio technology, such as the digital ability to piece together songs note by note from different performances. The tracks are almost equally divided between soprano and tenor sax, with one song, “Two of a Kind,” featuring him on both, duetting with himself, a slight, unintended hint of Seals & Crofts’ “Summer Wind” wafting through, while the wistful, airy “Moonlight” finds him taking a rare turn on alto sax, the instrument on which he first learned to play.

“I wanted to play songs with chord progressions that reflected the classic jazz era of Coltrane, Charlie Parker, Sonny Rollins, Cannonball Adderley and Dexter Gordon, while doing them my way, creating new standards,” he says.

For “Legacy,” he sampled the great Stan Getz playing tenor on a live, unaccompanied version of “Happy Birthday,” creating a duet with him on soprano sax.

“I took those individual notes and turned them into a melody I’m proud of,” explains Kenny. “I don’t think that’s ever been done before.”

Reminiscent of his global hit duet with a filmed Louis Armstrong on “What a Wonderful World,” Kenny G expects some jazz buffs night not be happy with his Getz tribute, even though, as was the case with the Armstrong song, he is donating all proceeds to the late musician’s estate and family, whom Kenny says are delighted with his version.\

Kenny performs a sprightly soprano sax on the opening “Emeline,” named after a close family friend, while the ultra-romantic “Only You” combines a variety of throwback chord changes with a soaring tenor sax gliding its way on top.

“Rendezvous” evokes a smoky jazz ballad of the ‘40s with its aching tenor, the first song Kenny G recorded for the album.“Paris by Night” evokes a foggy night strolling on the bridges across the Seine, while “Anthem” sports a duet between Kenny G on soprano and cello, giving the track a hymn-like, anthemic drive a song Kenny played live with the National Symphony in Nashville in December.

“Blue Skies” is an airy, whimsical melody he wrote with piano player Randy Waldman, a fellow airplane pilot — hence the title — whom he accompanies on soprano sax.  “Milestones” offers an homage to classic jazz tropes in name and sound, while the closing “Waltz in Blue,” titled for its three-quarter time crossed with a blues beat, ends the album on a rounded low B-flat, the perfect answer to the high E which begins the first track, “Emeline.”

The album forms an aural narrative, which makes it the perfect vehicle to demonstrate to film directors and music supervisors that Kenny G, the world’s most popular instrumental musician, is overdue to compose his first movie score.

“If any director needs a memorable instrumental for their film…” he offers. “I think I’ve proven what I can do.”

For the last several years, Kenny G has taken to the internet with gusto, his posts becoming memes and going viral, as he continues to have fun with the whole idea of being his iconic self, satirized in South Park, Trolls World Tour (as a frizzy-haired sax player threatens the whole pop music cosmos with his “smooth jazz”) and Saturday Night Live’s Kenan Thompson-hosted “What’s Up With That?” segment, where Fred Armisen plays a certain frizzy-haired soprano sax player.

“I don’t know why they just don’t have me do it,” Kenny G laughs, perfectly in on the joke. “When I was on the show playing with Foster the People, I told them, ‘Hey guys, I’m right here.’ I can fake playing sax really well.”

And, as you can hear on the excellent new New Standards, he does quite fine when he plays for real, too.

More details for this venue

The event runs from 8:00pm to 10:00pm on the following dates.
Select a date to add this event to your calendar app. 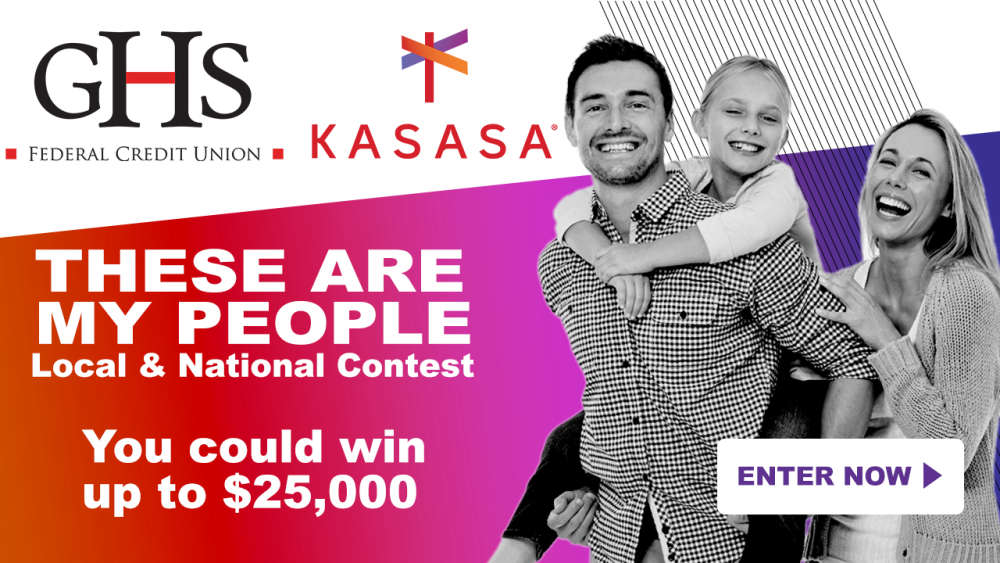 Be the first to know by signing up for the Country Club!

Supporting Local because we ARE Local!